Crowdfunding:The New Gold Mine of Web 2.0 in Africa

We’re in the early 1990s, somewhere in Africa. Children, not yet 10 years old, are dreaming big. Olivier wants to create a « Super Mario » for his friends when he becomes a man. Joëlle is still a little girl but wants to invent a Cartoon Strip. Many African children still to be born will also grow up with hopes and dreams of becoming technological creators and inventors. Today they are in their thirties, some of them are younger than that and they held this gap in the 3rd millennium, in an area where they do not actually imagined in their childhood: the web, new technologies, ICT.

Out of 55 web and IT projects collected in Africa from August 2014 to January 2015, five Cameroonian success stories are highlighted out of six total. Olivier Madiba has managed to launch a video game firm « Kiro’o Games », producer of the first video game from Cameroon « Aurion, the legacy of Kori-Odan. » Here is a demo of this video game.

Joëlle Ebongue, better known by her Artist name Elyons, is the creator of « The Diary of Ebene Duta », a cartoon strip originally distributed on the web via social media. She is sharing her experience in Crowdfunding. Neaby, Arthur Zang is working on a tablet for cardiology medical use, « Cardiopad« . In Buea, at a place called « Silicon Mountain »,another project, the digital wallet « Pursar » of Otto Isong and team is in development. These four projects have followed the funding model used by the Afropolitan webzine created by young Cameroonians, « FashizBlack ». One of the Co-founder of this webzine, Paola Audrey Ndengue, is sharing their Crowdfunding Story. The common denominator of these diverse initiatives and technologies success is Crowdfunding.

Crowdfunding is a mode of Internet financing which uses the techniques of Web 2.0 known as interactivity, online platforms, blogs, social networking and microblogging spaces.It appeals to the crowd, the greatest number of people and visitors for a project. Then there are four major categories of crowdfunding: donation crowdfunding, reward crowdfunding, credit crowdfunding and equity crowdfunding. Some details on crowdfunding are on this interactive video.

In Africa, the situation is clear, young African entrepreneurs prefer reward crowdfunding and equity crowdfunding. Here is the location of the Top 20 countries in Africa succeeding in Crowdfunding Campaign for web and IT projects.

Young African entrepreneurs use mostly online platforms to replace traditional financial actors such as banks and stock exchanges, because these traditional actors do not always believe on the financial success thanks to the web and ICT. Young Africans Entrepreneurs used some Crowdfunding platforms like Kickstarter, Indiegogo, KissKissBankBank, Ulule, Jumpstart and sometimes to African platforms : Thundafund, VC4Africa, FundaGeek, TechMoola, Mchanga, Zoomaal and many others. This Chart resume their preferences

Churchill Mambe Nanje of Njorku is talking about dificulties and tips for doing a good Crowdfunding Campaign.

Fritz Ekwoge of FeePerfect add his point of view on crowdfunding.

How does it work?

As explained in the last video, you will notice that this method of funding project has a downside if the entrepreneur has a bad reputation online. Fundraising can be unsuccessful if you do not communicate enough about social media and that it has no social media engagement strategy. Some people to remedy this situation are adding digital strategies online, few ordinary activities when you are seeking funding. To succeed in crowdfunding, just follow this graphic. 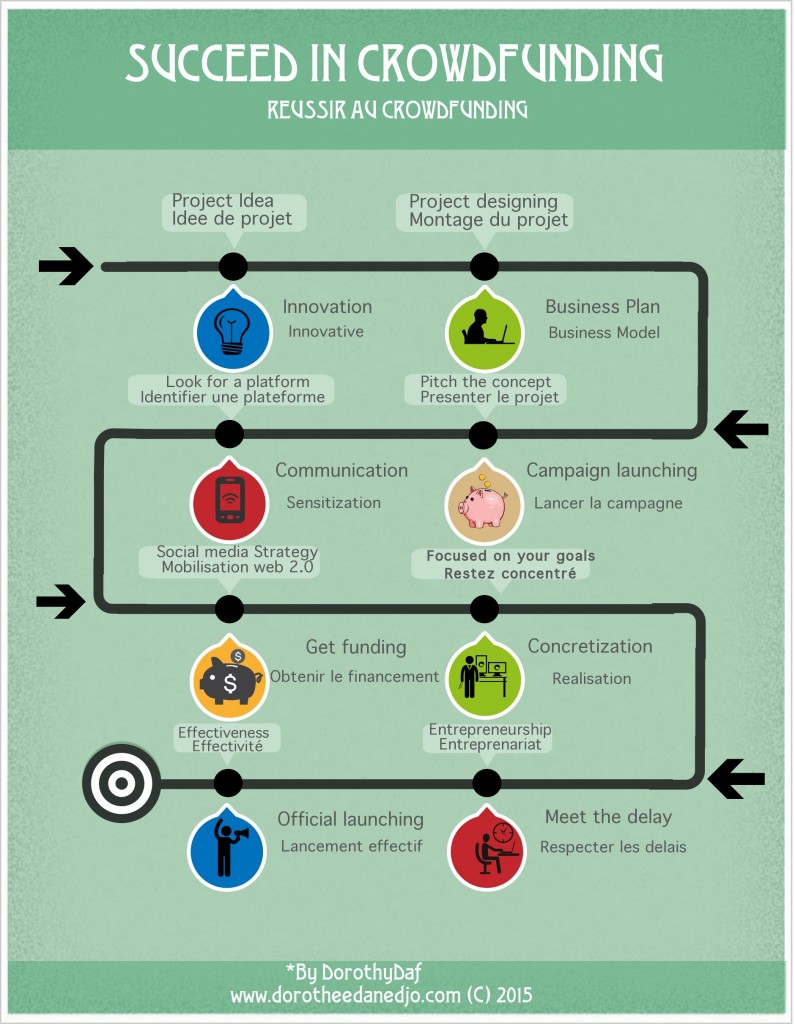 Process for success in crowdfunding

What is the value add for Africa?

According to the African Development Bank, the unemployment rate in Sub-saharan Africa is 6% then 1% higher than the world. So it is said that over 70% of Africans earn their living from precarious jobs. Only 17% of young workers in low-income countries, mostly situated in Africa, have an employment full time. Also, the World Bank is more alarming to the question: young people represent 60% of all Africans unemployed. Underemployment rate is 82% with 70% of young Africans living below the internal poverty line, less than $ 2 a day. In Cameroon, for example, official statistics show 13% unemployment and 70% underemployment rate by Strategy Paper for Growth and Employment. The informal sector is the main source of employment with 90.5% of workers. 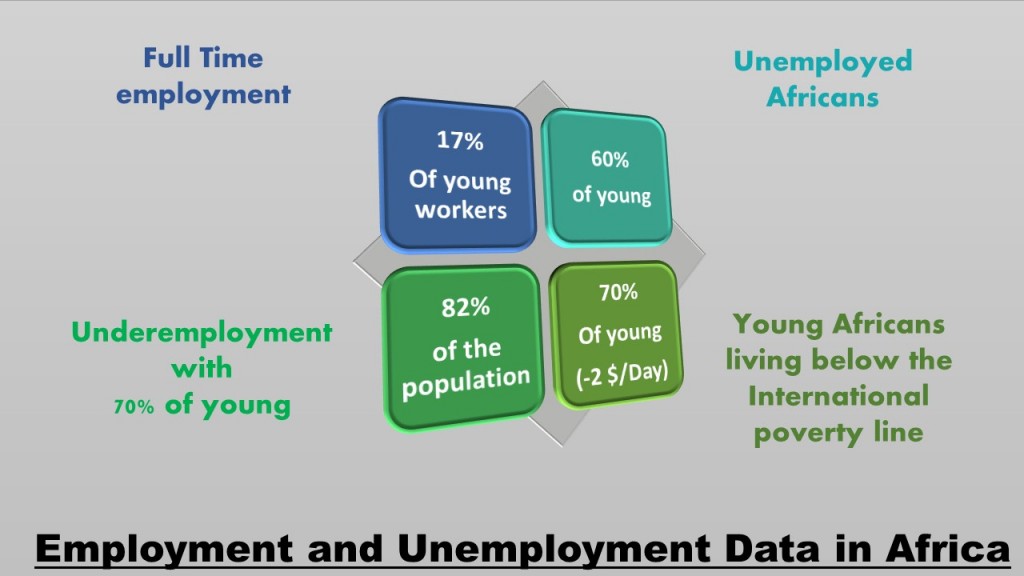 These data demonstrated that web and IT is like manna for Africa. Because Internet and mobile phones have increasing high penetration rates. More than 200 million Internet users, 79 million on social media or 18% of internet penetration and 67% of people who are connected on mobile phone in the continent. 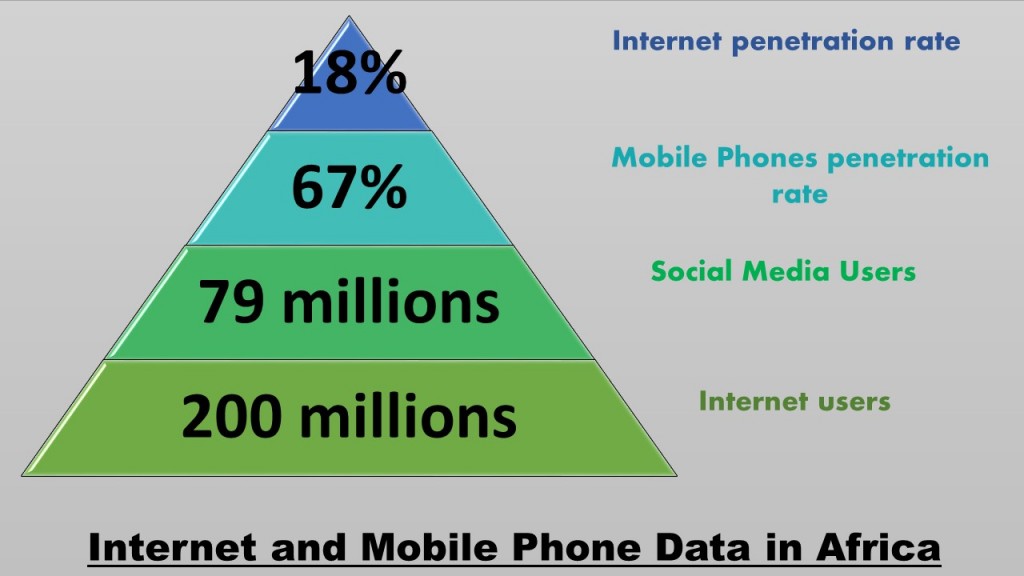 Internet and Mobile Data in Africa by Dorothydaf (C) 2015

In addition, the creation of web and IT products became an African specialty (InternetWorldStats). Young entrepreneurs have flooded the mobile market, online payments, video games, and web programming. Above all, creators are adopting in mass the methods of crowdfunding. Currently in Africa, followers of crowdfunding are in the dozens, not only in web technology sectors and the results are palpable, as projects materialize beyond childhood dreams into real technical and financial futures